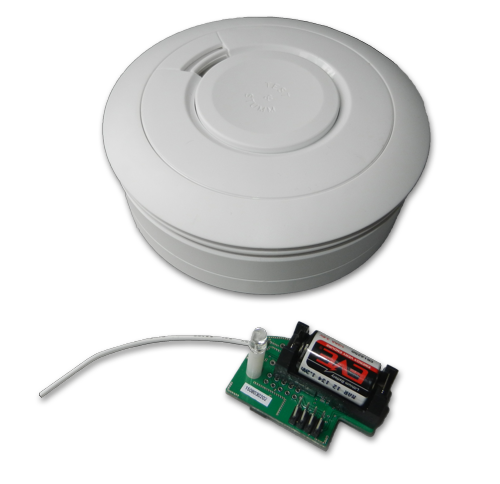 Popp 10 Year Smoke Detector is designed to warn you of smoke hazards and trigger actions via Z-Wave. It is powered by Popp Z-Wave technology.

Before purchasing make sure to contact your Z-Wave Gateway/Controller manufacturer to determine if this device is compatible, typically most Z-Wave gateways will be generically compatible to Switch and Sensor type devices. The technical specifications of 10 Year Smoke Detector can be viewed at that link.

Familiarize yourself with your 10 Year Smoke Detector. 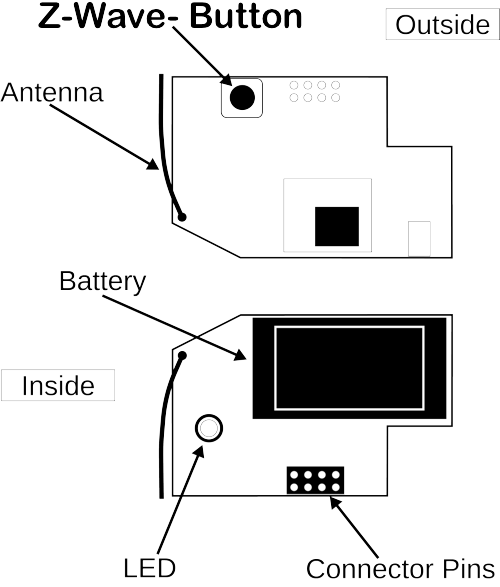 3. Your gateway should confirm if 10 Year Smoke Detector is successfully included into your network.

10 Year Smoke Detector cannot be directly controlled, all reports are done unsolicited (without your gateway asking) and will report based on the type of alarm generated.

This message will be issued to your gateway when smoke has been detected. You can test this report by pressing the test button.

When battery is low, 10 Year Smoke Detector will report a low battery report to your Z-Wave gateway to alert you. The yellow LED will light up to give you a visual indication that your AA batteries need to be changed.

When 10 Year Smoke Detector is removed from its back mounting plate, the sensor will forward a tamper alarm to your gateway.

When this product needs to be changed out for a new one, the sensor will send an End of Life report to indicate that this sensor will need to be disposed of and replaced. This should happen after 10+ years.

Communication to a Sleeping device (Wakeup).

This device is battery operated and turned into deep sleep state most of the time to save battery life time. Communication with the device is limited. In order to communicate with the device, a Z-Wave controller is needed in the network.

This device will wakeup regularly and report a wakeup state by sending out a Wakeup Report. The controller can then empty the queued commands.

If the device was included by a Z-Wave controller, the controller will usually perform all necessary configurations. The wakeup interval is a trade off between maximal battery life time and the desired responses of the device.

To wakeup the device please perform the following action:

Removing your 10 Year Smoke Detector from a Z-Wave network.

Your 10 Year Smoke Detector can be removed from your Z-Wave network at any time.You’ll need to use a Z-Wave primary controller to do this and the following instructions which will tell you how to do this using your existing Z-Wave Network.

This method can be used with any Primary Z-Wave Controller even if it is not directly paired to 10 Year Smoke Detector.

1. Remove 10 Year Smoke Detector from its back mounting plate.

2. Place your gateway or controller into Z-Wave unpair or exclusion mode. (Please refer to your controller/gateway manual on how to do this)

3. Push the Z-Wave Button for 1 second on 10 Year Smoke Detector once.

4. Your gateway should confirm if 10 Year Smoke Detector is successfully excluded from your network.

10 Year Smoke Detector LED will start to blink at one second intervals to indicate it is ready to be paired to a new Z-Wave network.

This method is not fully advised unless your gateway has failed, and you do not yet have another gateway to perform a general unpair.

1. Press and hold the Z-Wave Button for 10 seconds.

3. (@ 10 seconds) the Siren will sound a short beep to indicate a successful factory reset.

This device is capable of receiving a new firmware 'over the air'. The update function needs to be supported by the central controller.

Group Association is a specific function in Z-Wave that allows you to tell 10 Year Smoke Detector who it can speak to. Some devices may only have 1 group association meant for the gateway, or multiple group associations that can be used for specific events. This type of function isn't used too often, but when it is available, you may be able to use it to directly communicate to Z-Wave devices instead of controlling a scene within a gateway which can have unforeseen delays.

Some gateways have the ability to set Group Associations to devices that have these special events and functions. Typically this is used to allow your gateway to update the status of 10 Year Smoke Detector instantly.

This value is sent as BASIC Set to Association Group 3 when a Smoke Alarm occurs.
Size: 1 Byte, Default Value: 99

This value is sent as BASIC Set to Association Group 3 when a Smoke Alarm is cleared.
Size: 1 Byte, Default Value: 99